The Clackamas County Peace Officers Benevolent Foundation has been in partnership with Orphan Relief and Rescue for over six years now. This foundation raised the finances in 2009 to construct an orphanage for over 40 children who were living in an internally displaced camp after the 14-year civil war came to an end in 2003. The foundation also provided a much-needed 4-wheel drive Nissan Pickup in 2009 for our team on the ground in Liberia. This vehicle has enabled Orphan Relief and Rescue to deliver the necessary food and supplies to orphanage homes and children in rural areas in distress. Over the recent years, the Clackamas County Peace Officers Benevolent Foundation has helped fund a portion of the running of our new Transitional Safe Home in Liberia, and also provided for a new solar system and back-up generator for this home. Retired Sheriff’s Deputy, John Van Huizen, has spearheaded these fundraising efforts along with Sheriff Roberts, Mark Koberstein and many others who have selflessly given their time and resources. 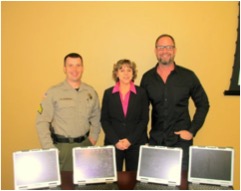 The Sheriff of Clackamas County, Craig Roberts, is an outspoken advocate for children’s safety. He arranged to have some older laptop computers donated to Orphan Relief and Rescue. The ten laptop computers donated by Sheriff Roberts were at one time used by deputies in their patrol cars. The computer’s hard drives were wiped clean, but was difficult to find some one who would be able and willing to get them ready for their next use. This is when Molalla Communications stepped in! Their Board of Directors has been supportive of the Clackamas County Peace Officers Benevolent Foundation, providing donations for the annual Shop with a Cop event in Clackamas County, and being a primary partner during fundraising drives for Orphan Relief and Rescue. Their Information Technology specialist took in the 10 donated computers and was able to “clean them up” and prepare them for use in Africa.

The computers will be put to good use in the Transition Center to familiarize the students with their use, and as their skills improve, the laptops can be used for school work as well as training for jobs when they leave the Transition Center. Some of the kids who have been cared for and educated through the efforts of Orphan Relief and Rescue have attained their goal of entering into the Liberian University system. A couple of the computers will also be set aside to allow them to do homework to be successful at college and in their future lives and the future of Liberia.