Few things start off big. Most often something begins small and experiences growth throughout a gradual process. The process is often slow, painful, unpredictable, yet beautifully unique. 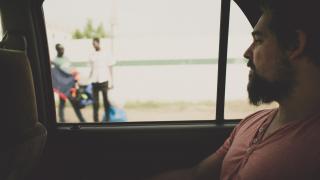 The air was hot and my shirt stuck to my back as we walked down the dirt road through a village. I was visiting Benin as a part of the Orphan Relief and Rescue Staff for the first time, my mission for our time there was to offer practical support to our local Anti-Trafficking Team, and further develop the organization’s long term strategy for addressing the overwhelming need in child servitude and slavery.

A faint sound of laughter could be heard in the distance, but my heart was heavy. The previous day a member of our anti-trafficking team had informed us that a young boy, age seven, was going to be sold into slavery as a laborer on a farm in Nigeria. The young boy’s mother was desperate for help, and asked if we could intervene. I was unsure what to expect, and the laughter I heard in my ears was a cruel reminder of what could be stolen from this boy.

Nervously I approached the small red dirt hut. A crowd of locals had gathered behind us to see what we were doing in their small, modest community. Half of our team met with the parents of the small boy, while the others went to converse with the small multitude of on-lookers. As the mother looked on with a pain in her eyes, the father explained the severity of the situation. “I do not want to send him to Nigeria, but if he is here there is nothing for him to eat. There he will eat, and maybe if he works very hard we will receive some money at the year’s end to help feed his brothers.” After a half an hour of conversation and what felt like a liter of sweat dripping down my back, it was agreed that the boy would not be sold off to Nigeria, but would enter our Intervention Project. As a participant in this program the fees associated with education and two meals a day would be provided for the boy. The relief on the seven year olds face was evident as he smiled widely and high-fived me.

As we began to leave the village our team was made aware of yet another desperate situation in the community. A young girl, no older than twelve was about to be taken back to Nigeria where she was forced to work long days with no pay and no reprieve. No doubt she also suffered serious abuse at the hands of her “employers”.

This girl, desperate to stay in Benin, had no living parents; with no one to care for her a life of slavery was the only option. My emotions froze over. No amount of education, awareness, or experience can prepare you for the emotional shock of hopelessness and the overwhelming problem of trafficking.

A solution was needed today, but we also knew her situation was not unique.

After a few hours on the back of a motorbike maneuvering through busy streets of pull-carts and street meat vendors we found a comfortable, safe, and vacant housing option. Within the next 24 hours, we had a home rented that would be used as a safe home, a caretaker hired, and a shopping list of items needed to turn the apartment into a home. Meetings with the social welfare office were scheduled, and for a moment I felt hope. Transformation, however small, was taking place.

It was a small beginning, but there I stood, looking into the eyes of a young girl who would never again be forced into a foreign land to be a slave. And now she is safe, and a world of opportunity and hope awaits her. These stories are just a drop in the bucket of what needs to happen in Benin to see the end of child-trafficking – but they represent the next step of the process that will transform Benin and bring freedom to tens of thousands of children.

Orphan Relief and Rescue is working to bring an end to Child Trafficking in Benin through a comprehensive approach to the issue. We work in Rescue, Restoration, Intervention, and Empowerment. Consider partnering with us through a monthly gift to see the lives of children in Benin transformed.