Today we want to highlight the heroes of Orphan Relief and Rescue. We recognize that the work we do can only happen with your partnership and sacrifice for this cause. We are grateful to all of our partners who and for those who go above and beyond as champions for children.

This months heroes are John and Marianne VanHuizen of Mollala, Oregon. 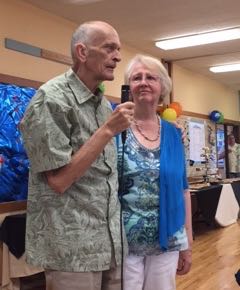 During the past seven years John and Marianne have been supporters of ORR. I remember the day John and Marianne approached Rebecca and I at a church service in East Texas. They wanted to know about the new charity we had started. As we shared our vision about bringing relief and rescue to the orphans and abandoned children of Liberia and Benin, West Africa, they immediately jumped at the chance to help.

John, a retired deputy of the Clackamas County Sheriff’s Department in the state of Oregon, does not believe in retirement. His tireless work, nationally and internationally, is amazing. We met John while we were serving on the Mercy Ship M/V Anastasis, a hospital ship that serves the poor and needy on the continent of Africa. John used his skills of renovations to help aboard the ship while Marianne, a nurse by trade, used her skills to help fund her husbands trips to Africa. They are a great team.

Over the past seven years John and Marianne have helped with many projects with ORR, from building a home for 44 internally displaced orphans in Liberia to procuring a much needed Nissan pickup truck that is still in service and helps us deliver materials and food to the hundreds of kids we serve. This past weekend we attended John’s 70th birthday party. John is suffering with cancer, yet still this hero is serving others as long as his body allows him. I have met few people that I admire more than John. He is a man of integrity and when he makes a commitment, he follows through every time, no matter the difficulty. This man is a true hero. One of the highlights of the party was when John took the microphone and shared about the most special woman in his life, his wife Marianne. I don’t think there was a dry eye in the house.

In gratitude to the amazing legacy of John and Marianne, we have opened up a scholarship fund for one of our exceptional kids in Liberia. Janet Smith, the scholarship recipient, is currently in her first year of medical school and wants to become a medical doctor to serve her country.

Join us in thanking John and Marianne for the amazing work with ORR.